A lot can happen over the period of a year and if you have a growing family, as your children get older no longer does it become a case struggling to get them into the bathroom but more becomes a warm trying to get them out. The last few years has seen a considerable increase in emphasis on appearance where youngsters are concerned. It is a psychological pressure that many could do without, but it is inescapable.

As a result, our children spend far greater time ‘perfecting their look’ then they ever used to and unfortunately the majority of this time is not spent in the bedroom but instead is spent in the bathroom, usually stuck in front of the mirror over the wash hand basin. If you are parents with three teenage children it is not difficult to paint a picture of what life must be like both first thing in the morning and also early in the evening. 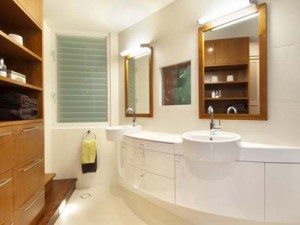 To ease the strain on overuse of the bathroom there are a number of options available to you which could help either ease or totally resolve this situation. Here at Baines Bathrooms in Bristol we have become masters of creating super-functional bathrooms, shower rooms and wet rooms and you would be surprised just what can be achieved with even just a small space.

As an example, your original bathroom may well have been arranged where only a bath and not a shower as well was going to be installed. With a new bathroom installation, you would be surprised just how much space can be created through repositioning of a bath, wash basin and toilet, to the point where installing a new shower cubicle becomes feasible. Instantly, with the installation of a new shower, you have freed up 10 to 15 minutes of bathroom use as it is perfectly possible to take a quick shower in under five minutes, but when someone says they going to take a quick bath, take the word quick with a pinch of salt!

If you happen to have teenage sons, the addition of a shower cubicle often means that one son can take a bath while the other takes a shower and if correctly installed, nobody should have to suffer when taking a shower while someone runs a bath – we’ve all been there, haven’t we?

Of course there is the possibility of creating a small wet room. You would be surprised just how little space you need, space that could be created by pinching as little as an area measuring 0.75m x 1.5m from each of two adjoining rooms. And if you don’t believe us, the photograph we are using is of a wet room that actually measures 1.6m x 1.4m! We also think it looks really great and a swinging shower screen ensures that the toilet (and toilet paper!) doesn’t get soaked when taking a shower. Although you can’t see it, there is also a small corner washbasin in the near left corner.

From design and planning through to installation of a new bathroom or installation of a new wet room you will find at Baines Bathrooms that we will be able to come up with virtually any solution to help you create a second or third such facility in your home and if you’re still not sure, why not give us a call and invite us over. We don’t charge for any initial services and you might just be pleasantly surprised with what we can come up with for you.

Think we might be able to help? Get in touch for a free quote.

Get in touch
Prev Next